I got to thinking about getting an inflatable kayak before the RV and truck. We can use it at the local lake for exercise and fun. I’m thinking the technology will not change much in the next three years so an inflatable kayak should be a safe purchase. Meaning, we can find one to keep later while on the road.

I started in law enforcement as a civilian employee Water Safety Officer. Karen grew up sailing with her father on Michigan’s lakes. Southern Missouri and northern Arkansas are packed full of great canoeing spots which were always enjoyable. I sold our fishing boat a few months ago, although it sat forever without use. We are both lovers of the water and find having an option to boat around is a plus.

So many full-timers buy the Sea Eagle brand that I find no reason to look at other brands.

Articles by Big Sky Fishing.com: Not sure if this site is a cover for marketing Sea Eagles or not. It does have good information however.

Purchase Here – Inflatable Boats for Less.com: Keep reading where others refer people to them. You can get them on the phone and ask questions. Lots of information on their site. Claim to have been in business since 1998. I like Tim’s way of evaluating boats, here is a link to his top five.

Link to Class Definitions: Appears boat sturdiness are rated by what class water they can handle. When comparing boats the ones with more drains or larger tubes seems to also be a factor in rating them. As I read various boat reviews, maneuverability also came into play when using the boat in whitewater conditions.

Boat setup video: I had been wondering if they were easy to setup. Sea Eagle has a number of videos online.

Video by Linda and Howard of RV Dreams: They own the Sea Eagle 370 and two others.

The Purchases (Boat and Vest)

It was part of my decision to consider the cost and I had to justify $970 for an inflatable boat in my mind. I knew we could make due with the $300 model and most likely if we were already on the road, rather than still working, I would have spent only the $300. We can afford the more expensive boat and I believe the one we selected to be the best of the best at meeting our wants. I did not want to buy used so we would have the full three year warranty. I also found out the boat I selected was redesigned in 2014. Now, we just have to use the boat as much as we would use a $1,000 generator!

I checked the price of canoe rentals for the Buffalo River in Arkansas. Cost is $65 a day. The same money will get you a rental fishing boat at our local lake for two hours.  The price of the Sea Eagle 385 is equal to 15 days of canoe rental.

Man, these suckers got expensive over the years. Fortunately they have vests design for paddling sports. Both Karen and I can swim, although I’m not the strongest swimmer.

Vest, or personal flotation devises, come in Type 1 through 5 with 1 providing the most flotation. Type 3 appear to be the most common for kayaking in boats with shorter seat backs.  Ones with high backs are considered best so they don’t interfere with your seat in this case. But the seat we are getting are high back so that’s not an issue. Room under the arms for movement is a must have.

I’m sure any general purpose vest would work. I noticed Linda and Howard of RV Dreams were wearing the  inexpensive Stern general purpose vest in their video. I’m considering one with pockets for fishing but would not sacrifice comfort. We also don’t want to spend what it takes for “the best.” I started off looking at what local sporting goods stores offer so we could shop around and also get an idea of what a reasonable priced brand would be. The Sea Eagle Type III is $50 and is not high in the back which is a sign that a general purpose, compared to one high on the back, will work fine. I like their blue color to match the boat. As I watched videos I noticed how some are not wearing vests correctly. You want it to be snug (adjustable) so when you go in the water it does not push up and cover your face. In videos I can see some using vests that stick up even when seated.

I posted over on the RV Dreams Forum for some advise. “As far as PFD’s – don’t worry about whether it is a long or short vest – just pick one that you are comfortable with.  If it’s not comfortable, you won’t wear it and thus defeats the purpose of purchasing a PFD.”

Wonder if they have vests that would cause an alligator to spit you out because of the taste? I still can’t get over the photos people take with alligator’s in the water. 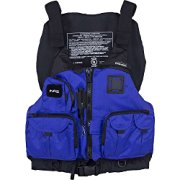 I ended up buying the NRS Chinook Mesh Back Fishing PFD for myself, apparently just before the price went up! I had been worried the rear flotation on the vest would hit the top of the high back kayak chairs. That was not the case. This is a very comfortable vest.

Karen was going to be a little harder to please when it came to a vest. She only wanted to wear a ski vest (thin thing that goes around your waist) which is what she used when sailing on the Great Lakes with her father. We went to the local sporting goods store and discovered as it’s the end of the season the selections were terrible. And so were all the vest they did have for sale. She ended up liking the one I bought so we ordered her the next size smaller.

Freedom DateAugust 22nd, 2019
The day we went fulltime in an RV 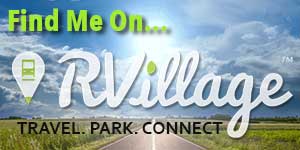